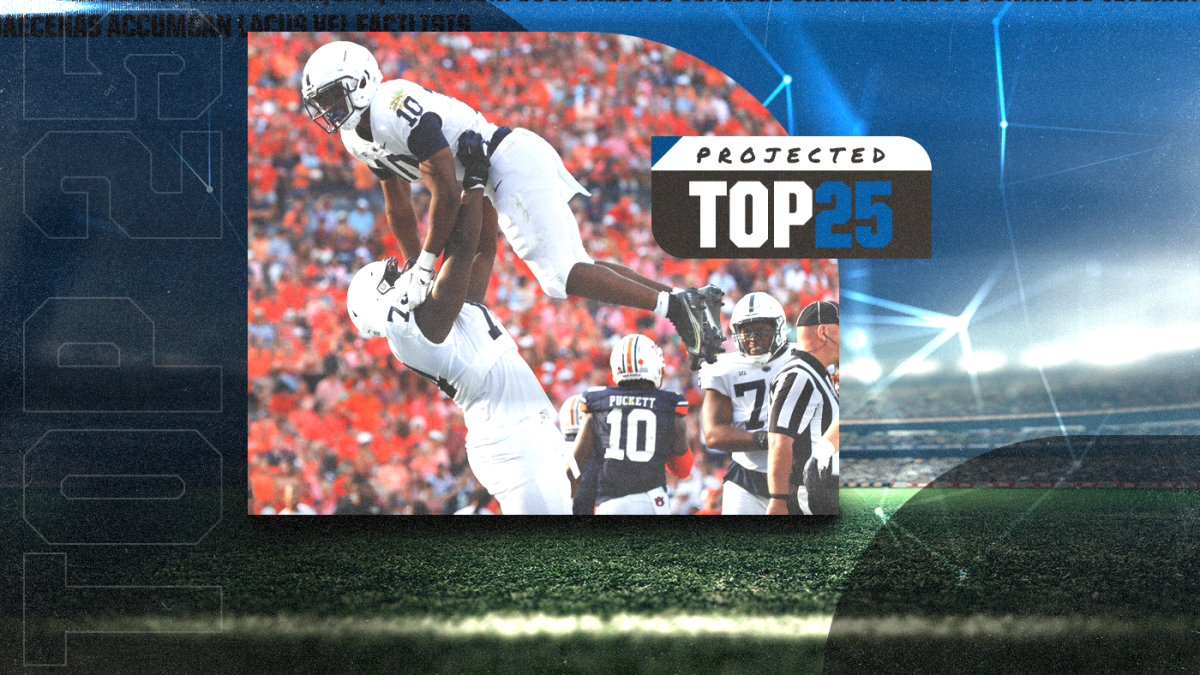 College football offered a smorgasbord for fans in Week 3 given the wide range of scores, results and highlights that were presented across Saturday’s games. While this week reminded fans why they love the sport, it is also the type of week that gives AP Top 25 voters headaches as they attempt to fill out the newest college football rankings that will be released Sunday.

How much of a boost should Oregon get after its dominant win against a highly ranked BYU team? Should Michigan State drop all the way from No. 11 to outside the rankings after tanking against Washington? Arkansas avoided an upset against Missouri State, but did the Razorbacks look like a top-10 team as Bobby Petrino’s squad pushed them to the brink in his return to campus? Should Florida drop out of the rankings after being taken to the wire by a South Florida team that has been one of the worst in the nation across the last two-plus seasons? Perhaps most interesting: Which unranked teams should be among the top 25, and should absolutely incredible Hail Mary finishes be a bonus point when it comes to ranking the best teams in the country?

Luckily, there are some calls that will be easy, and we feel confident predicting them here in our weekly projection of the updated college football rankings. Penn State will be one of the most notable movers following its win at Auburn, not just for the notching one of the program’s biggest nonconference wins since joining the Big Ten but also for the form it showed in victory. Given the events of Saturday, it’s looking like the Nittany Lions are much closer to the Ohio State and Michigan, still both in the top four after dominant wins, then the rest of the pack in the Big Ten.

Oregon and Washington also offered some positive headlines for the Pac-12 with nonconference wins as they beefed up the league’s profile with victories against opponents ranked among the top 12 teams in last week’s rankings. The Ducks will be somewhat limited by their one loss (despite it coming to No. 1 Georgia), while the Huskies’ ceiling is only limited by the fact they weren’t included on a single ballot as a top 25 team heading into the weekend.

Here’s how we think the new AP Top 25 will look on Sunday when the new college football rankings are released.

1. Georgia (Last week — 1): It took more than 11 quarters of action before Georgia finally allowed an opponent to reach the end zone, but it did happen. Even still, the Bulldogs showed no signs of being anything other than the best team in the country in a dominant win over South Carolina.

2. Alabama (2): An early offensive explosion was predictable but the way that the Crimson Tide poured it on in a 63-7 win against ULM suggests there was plenty of motivation coming out of the narrow win against Texas.

3. Ohio State (3): It was good to see both Jaxon Smith-Njigba and Julian Fleming healthy again for this Ohio State offense, which was relentless and methodical across all four quarters in a 77-21 win against Toledo. It was also a good game to bring C.J. Stroud back into the Heisman Trophy spotlight with 367 yards and five touchdowns on 22 of 27 passing.

4. Michigan (4): An injury for Cade McNamara ends up being the biggest headline from the Wolverines’ 59-0 win against UConn as yet another inferior opponent provides little resistance for the reigning Big Ten champions. Up next is the conference opener against Maryland, which should provide a decent test for Michigan’s defense but won’t exactly be a popular upset pick given the way Jim Harbaugh’s team is operating on both sides of the ball.

5. Oklahoma (6): Last week saw less than 100 voting points separate Oklahoma from Clemson, so we’re predicting a slight move up following the Sooners’ impressive 49-14 win at Nebraska. The Cornhuskers may have been a wild card in terms of expectations following the dismissal of Scott Frost, but the well-rounded road win would be impressive against any Power Five opponent. Oklahoma got out in front early and cruised the rest of the way, only allowing one touchdown on Nebraska’s first drive of the game and another in garbage time with the contest decided.

6. Clemson (5): The Tigers have a defense that’s strong enough to win the ACC, but until the offense becomes a little more explosive and consistent, its going to be tough to consider Clemson as one of the best teams in the country. A 48-20 win against Louisiana Tech only brings more attention those offensive issues, which could cost the Tigers a spot in the rankings.

7. USC (7): Thumping Fresno State won’t do much for the AP voters, but the performance did raise an important question regarding the ceiling of this team in coach Lincoln Riley’s first year. As long as the offense — with 40-plus points in all three games — is clicking at this level, is there anyone on the schedule that can outscore the Trojans?

8. Oklahoma State (8): No major changes for the Cowboys after a 63-7 win against FCS Arkansas-Pine Bluff.

9. Kentucky (9): A 31-0 shutout of Youngstown State brings the attention back to a Kentucky defense that was a key piece to winning last week at Florida and has allowed less 17 points in all three wins so far this season.

10. Arkansas (10): There may not be an obvious candidate to jump ahead of the Razorbacks in the rankings, but some voters will dock Arkansas for needing a 21-point fourth quarter to escape Bobby Petrino’s upset bid with Missouri State. The 38-27 win is enough to avoid a total rankings collapse, for now, as Arkansas’ attention turns to Texas A&M on the road in Week 4.

11. Tennessee (15): An undefeated record and a road win against a ranked opponent give the Volunteers a profile that’s going to make them a candidate to be elevated in the wake of some shake up. The 57-point win against Akron is just window dressing for what’s already been brewing when it comes to Tennessee hype heading into next week’s SEC on CBS Game of the Week against Florida.

12. Penn State (22): The final ranking will be a composite of several different spots across the 60-plus AP Top 25 ballots, but ultimately our thinking is that this is a 3-0 team with two road wins against Power Five opponents. Throw in the big-time SEC on CBS stage and the lopsided nature of the 41-12 win at Auburn, and it’s likely the Nittany Lions will be one of the more significant risers in the rankings.

13. Washington (NR): It feels like Michael Penix and Washington have been able to provide all of the offense that Huskies fans were looking for last season in just three games, and to have the same level of success against against a top team like Michigan State as they did against Kent State and Portland State suggests that this is one of the better teams in the Pac-12.

14. Utah (14): Utah took care of business against San Diego State, leaving no doubt with a three-touchdown halftime lead and cruising to a comfortable win. The loss to Florida remains a weight that pulls down the Utes’ ranking ceiling, but the product on the field otherwise is still strong enough to hold their position in the polls.

16. Oregon (25): Bo Nix and the Ducks have quickly found their footing after a tough season-opening loss to Georgia. According to 247Sports’ Matt Prehm, Oregon’s first-team offense scored on 13 straight drives after being held without a touchdown against the Bulldogs in the opener. That was seven straight scoring drives in the win against Eastern Washington and six consecutive scoring drives to start in the 41-20 win against BYU.

17. BYU (12): The Cougars were shorthanded at wide receiver and along the defensive line, but that doesn’t excuse the ease with which Oregon was able to move the ball in the 21-point Ducks win. BYU’s drop in the rankings is limited thanks to its win over Baylor, and the Bears should hold close to their previous spot after a 35-point win against Texas State.

18. Texas A&M (24): A quarterback change from Haynes King to Max Johnson did not yield dramatically different results on offense, but the Aggies defense stepped up in a 17-9 win against Miami. The key to the game was how Texas A&M forced field goals when Miami had scoring opportunities, a habit that will be needed even more with upcoming games against Arkansas and Mississippi State.

19. Baylor (17): The halftime score was far more concerning than the final, but a slow start after an overtime road loss at BYU is not enough of a red flag to lead to any major changes in the rankings. The final score looks in sync to pregame expectations, and that’s all that matters to some voters.

20. Ole Miss (20): The AP voters won’t do a ton of adjusting following a 42-0 win at Georgia Tech, but the result should raise eyebrows across the SEC as the Rebels seem to be rounding into form as a really dangerous team heading into conference play.

21. Texas (21): Texas trailed 17-7 with 9:38 left in the first half only to outscore UTSA 34-3 over the remainder of the game to improve to 2-1. West Virginia is up next before the schedule gets much tougher. Bijan Robinson had a 78-yard touchdown run as part of his 183 yards rushing and three scores on the evening.

22. Wake Forest (19): There were a lot of near-upsets for ranked teams and not all of them will be treated the same, but the 37-36 win against Liberty is going to draw some reactions from voters who were maybe already a little lower on the Demon Deacons.

23. Pittsburgh (23): Down to their third-string quarterback, Pitt was able to maintain its ranking status with a 34-13 win against Western Michigan.

24. Miami (13): The Hurricanes offense failed to reach the end zone against Texas A&M, and though Miami was never out of the game. the lack of success in the passing attack made it difficult for Miami to really threaten for an upset against Texas A&M. Based on the opponent, setting and point spread, this was not a bad loss, but voters will have a hard time arguing for top-15 or even top-20 placement on their ballots with Miami’s only wins coming against Bethune-Cookman and Southern Miss.

25. Florida (18): While Florida’s near-upset at the hands of USF is going to lead to a drop in the rankings, the win over Utah still holds enough weight this early in the season to keep the Gators inside the top 25.

Projected to drop out: Michigan State (No. 11)