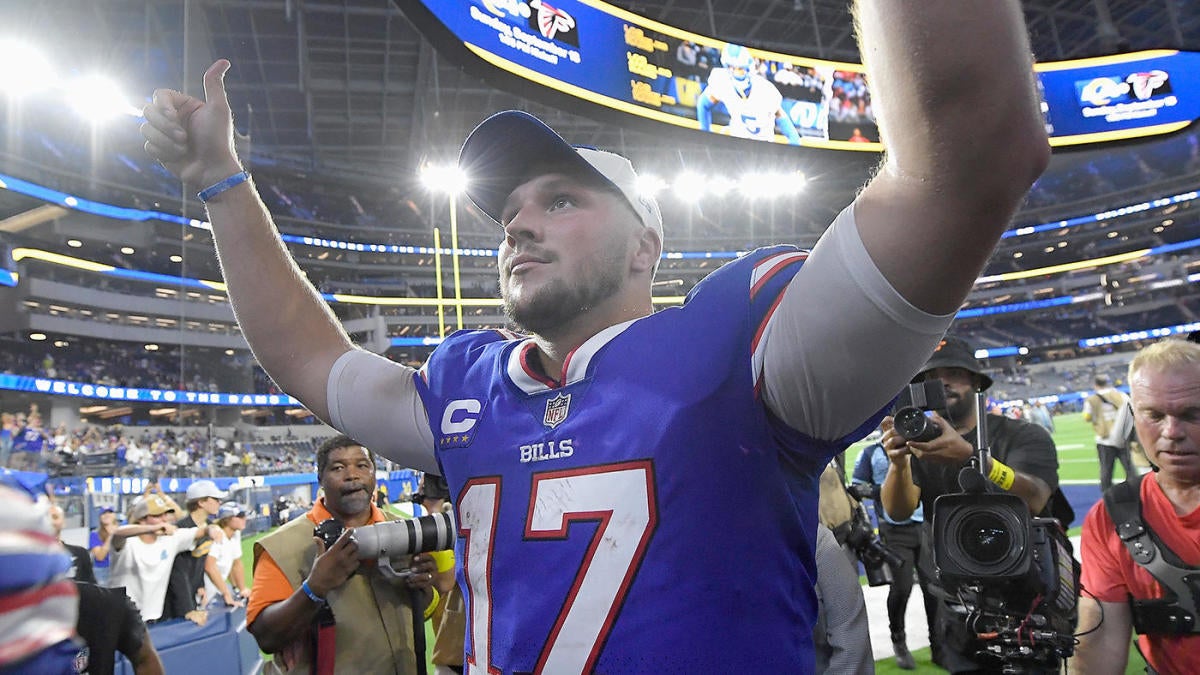 The time has come. The 2022 NFL regular season is over, and it’s time to begin the process of crowning a new champion. The Kansas City Chiefs and Philadelphia Eagles secured the first-round byes in the AFC and NFC, respectively. Will it help them? It certainly did not help the Green Bay Packers and Tennessee Titans last year, who both were knocked out in the divisional round.

Which team is poised for a deep run, and which favorite gets upset early? Will Josh Allen have us believing the Buffalo Bills are a team of destiny? Can Brock Purdy shock the NFL world with a Super Bowl run? Below, we will attempt to predict the entire NFL playoff bracket, game by game. We’ll update this each week as we march further and further into the postseason. Let’s jump in.

All NFL odds are via Caesars Sportsbook.

This is going to be a rainy game, so Christian McCaffrey, Elijah Mitchell and Kenneth Walker are going to be the main weapons on offense. These division rivals, of course, played twice in the regular season, with the 49ers winning both matchups. They defeated the Seahawks in Seattle by eight points, and at home by 20 points.

This year was actually just the first time since 2011 San Francisco swept Seattle. Since 1970, there’s been 23 instances of a team going 2-0 in the regular season against an opponent, and then meeting for a third time in the playoffs. The team that went 2-0 is 14-9 in that third meeting. The Seahawks got in the postseason by the skin of their beak, and I’m not going to take them to upset the 49ers in the first round.

Here’s a rematch from Week 3 of the regular season, where the Jaguars destroyed the Chargers in L.A., 38-10. Austin Ekeler received a season low in touches, while Keenan Allen did not play. Last week, Brandon Staley for some reason played his starters deep into the second half in a meaningless game against the Denver Broncos, and saw Mike Williams and Joey Bosa suffer injuries. I’m expecting both to play this weekend, but it’s unfortunate Rashawn Slater won’t be out there.

I’m not surprised the Chargers are favored in this matchup, but I’m going with the underdog. The Jaguars are juiced up, and it was almost weird to see them have a home-field advantage against the Titans in Week 18. It also stood out that the defense won the game for Jacksonville when the offense wasn’t exactly clicking on all cylinders.

This matchup probably isn’t considered a “must-watch” game on Super Wild Card Weekend, but I’m glad it worked out this way. The Giants and Vikings gave us an entertaining game in Week 16, with Greg Joseph hitting a 61-yard game-winning field goal. Justin Jefferson and T.J. Hockenson exploded, combining for 242 receiving yards and three touchdowns. However, it’s noteworthy that Adoree’ Jackson and Xavier McKinney missed that game. They rank top two on the team in completion percentage allowed among defensive backs this season.

I’m going to take the upset here. Daniel Jones and Saquon Barkley have craved this stage, and it has to be somewhat comforting to play a team you just faced off against a few weeks ago. The Minnesota defense will make the New York offense look better than it is, as the Vikings defense ranks bottom five in points per game (25.1), yards per game (388.7) and yards per play (5.9) allowed this season.

Lamar Jackson is reportedly facing an uphill battle to play on Sunday, so the Bengals will win this game. They have momentum, while the Ravens do not. Cincinnati just defeated Baltimore, 27-16, last week. I’m taking the Bengals to cover the spread as well.

Tom Brady is 7-0 against the Cowboys, while Dallas is 4-5 as a playoff favorite since 1996. Additionally, Brady is 7-3 when Vegas makes the mistake of listing him as a postseason underdog. It seems like everything is lining up in the Buccaneers’ favor, but I’m going to go with who I think is the better team.

Maybe the Buccaneers found something on offense with that win over the Carolina Panthers in Week 17, but I have more faith in Tony Pollard and CeeDee Lamb. Notice I didn’t say Dak Prescott, who finished the regular season tied for the NFL lead in interceptions with Davis Mills despite missing five games.

I predict the Buccaneers jump out to a 10-0 lead, before the Cowboys control the second half and pull out a win. I fully understand not having faith in the Cowboys, but you could say the same about the Buccaneers — even if they have the greatest of all time at quarterback.

Here’s a rematch from November, when the Chiefs defeated the Jaguars, 27-17. Trevor Lawrence played fine with 259 passing yards and two touchdowns, but his defense struggled to stop Patrick Mahomes, who threw for 331 yards, four touchdowns and an interception. Congratulations to the Jaguars for making it this far, but I don’t see them upsetting the No. 1 seed in the AFC on the road.

Last time these two teams played, we all witnessed the unfortunate Damar Hamlin incident. It looked like we were in for a great shootout before that scary event occurred. Honestly, this could be a bit like the Bills-Chiefs AFC matchup in the divisional round last year.

Joe Burrow is going to be 4-1 in his playoff career if he makes it to the divisional round. The Bengals have already made it known they are a dangerous playoff team, as they went 4-0 ATS last postseason — even covering the spread in the Super Bowl loss. However, I think their run ends here against the Bills. Buffalo was Super Bowl favorites all year long, and the Hamlin situation certainly gives the Bills some added motivation. Buffalo pulls out a close win in the divisional round.

Another divisional, postseason matchup. In December, the Eagles blew the Giants out by 26 points, and then Davis Webb kept it close in the regular-season finale, losing 22-16. Philly will be rocking, and Jalen Hurts scores three total touchdowns. I’ll be interested to see what the spread is in this game, but I’m not going to take the Giants to beat the Eagles straight up. There’s a reason why they swept the season series this year.

It’s deja vu in a way, except this Cowboys-49ers game will be played in California. The key to this game for the 49ers is containing Ezekiel Elliott and Pollard. In the playoffs last year, the two backs combined for just 45 rushing yards. In a weird way, I have more faith in this Purdy offense compared to the Jimmy Garoppolo offense, as his chemistry with George Kittle and Brandon Aiyuk continues to evolve. Aiyuk is an underrated wideout who is tough to contain downfield. Jerry Jones is fuming, as Purdy defeats Prescott.

Picking Purdy to upset the Eagles in Philly is going to be a trendy pick heading into championship Sunday. The 49ers’ defense will hold Hurts in check, but ultimately, the Eagles close out the game in the fourth quarter, and once again advance to the Super Bowl.

Devin Singletary rushed for 85 yards on 17 carries (5.0 yards per carry) vs. the Chiefs earlier this season, which helped balance out the offense, but all three touchdowns came through the air. The Chiefs, on the other hand, rushed for just 68 total yards, but Isiah Pacheco wasn’t a big part of the offense early in the season. I predict this playoff rematch will be more like the regular-season game as opposed to their Jan. 23 matchup last year. There won’t be 78 total points scored, because Buffalo’s defense will be up to the task of containing Travis Kelce and the Chiefs wide receivers. Bills to the Super Bowl.

In a way, it feels like we have been leading up to this all year. In the early part of the 2022 season, it was the Bills who looked like the best team in the AFC, and then the Eagles in the NFC. Opinions probably fluctuated after Allen’s elbow injury and Hurts’ shoulder injury, but the cream rises to the top, and that’s what happens here.

Allen has played the Eagles just one time in his career, losing 31-13 in 2019. Philly’s running backs combined for three touchdowns, while Allen threw for just 169 yards and two touchdowns. It will be Hurts’ first time playing Buffalo.

So, what will this game come down to? I’m expecting a sloppy first half followed by a high-scoring second half. This game goes to overtime, where Buffalo kicks a game-winning field goal on its second drive of the extra period. The Bills fulfill the “team of destiny” narrative.