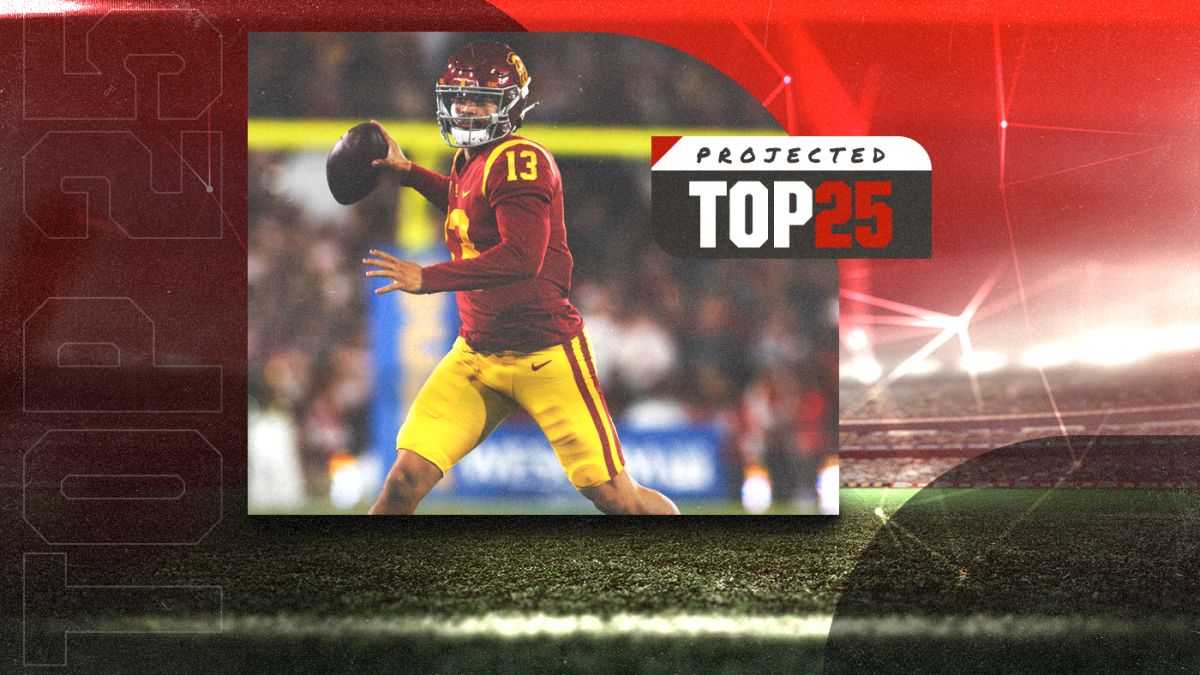 The razor-thin margin for error in college football was on display throughout the scores and results from Week 12. It was a week where the scoreboard showed a couple upsets for top 25 teams, but we were also a few bounces away from total chaos in the college football rankings.

No. 1 Georgia was backed up into the red zone by Kentucky, holding a 10-point lead with 5 minutes left in the fourth quarter before forcing a missed field goal and a turnover on downs to remain undefeated. No. 2 Ohio State, also on the road against an unranked opponent, led by just three points late in a battle with Maryland. Meanwhile, No. 3 Michigan and No. 4 TCU both won thanks to last-second field goals. If a few plays (or even just a couple kicks) had different results, the AP Top 25 voters would be faced with a difficult challenge sorting out the carnage in their updated ballots.

That’s not to say the voters job will be easy in the wake of Saturday’s results.

The debates about body of work against recent results will be on full display with the slotting of Tennessee after a stunning 63-38 loss at South Carolina. The Volunteers are now 9-2 and carry wins against both Alabama and LSU, yet Saturday night’s defeat as a 22-point favorite could have Tennessee falling behind one or both of those SEC foes. A similar conservation will be had further down in the rankings after Ole Miss lost for a second straight week, this time at unranked Arkansas. The Rebels are 8-3 and fell just one score short of toppling last week, when looking for quality wins voters must determine how valuable close wins against Kentucky and at Texas A&M are compared to other three-loss teams.

By the end of the night, five teams from the top 16 in the AP Top 25 will have taken losses, providing plenty of opportunities for other teams to move up. Benefitting most from the limited chaos were USC and Clemson, which each took care of business (in quite different fashions) to remain atop their respective conferences entering Week 13. If both can win out, the College Football Playoff Selection Committee may have some extremely tough decisions to make on Selection Sunday.

Here’s how we think the new AP Top 25 will look on Sunday:

1. Georgia (Last week — 1): An absence of an obvious challenger for the No. 1 spot keeps the status quo as the Bulldogs remain at No. 1 following a 16-6 win at Kentucky.

2. Ohio State (2): The Buckeyes could catch a few more first-place votes after pouring on the points late in a 43-30 win at Maryland, but voters tracking scores through the day will note that this was a three-point game deep into the fourth quarter. Freshman running back Dallan Hayden had a breakout performance with 146 yards and three touchdowns, all of them after halftime as Ohio State overcame an early deficit and took control of the game in the third quarter.

3. Michigan (3): There is a lot to be concerned about for Michigan coming out of Saturday’s win against Illinois — from Blake Corum’s health to how often scoring opportunities seem to end in field goal attempts — but merely holding on for a win will be enough to remain in the top five of the rankings.

4. TCU (4): The dream season continues for TCU thanks to quarterback Max Duggan leading a couple of fourth-quarter scoring drives, opening the door for a potential jump into the top three of the rankings. Our projection is that the AP voters will keep last week’s order in place, but the playoff committee has fewer voters can thus can be more volatile. TCU could end up No. 4 on Sunday but No. 3 on Tuesday night thanks to the game-winning field goal at Baylor.

5. USC (7): The Trojans rallied from down 14-0 after the first quarter, outscoring the Bruins by 17 over the final 45 minutes for a 48-45 victory to remain the lone one-loss team in the Pac-12. With Tennessee falling and USC impressing down the stretch as it clinched a spot in the Pac-12 Championship Game, the Trojans should jump two-loss LSU into the fifth spot.

6. LSU (6): The Tigers enjoyed the Senior Day festivities with a 41-10 dismantling of UAB. Up next is a trip to College Station to face Texas A&M, then the SEC Championship Game against Georgia.

7. Clemson (9): With a 40-10 win against Miami, the Tigers have now won 40 consecutive home games. Thanks to some of Saturday’s results elsewhere, things are looking up for Clemson’s CFP chances. This marks only the ninth 40-game home winning streak in FBS history, the first since Nebraska won 47 straight home games from 1991-98.

8. Tennessee (5): The injury to star QB Hendon Hooker has added layers of disappointment for a program that saw its playoff hopes dashed with the lopsided loss to a division foe.

10. Oregon (12): In defeating Utah, the Ducks seem certain to jump into the top 10, but what’s the ceiling? Look for Oregon to be as high as No. 8, but our official projection is Dan Lanning’s crew will take the Utes’ spot at No. 10.

11. Penn State (11): While chaos ensues all around Penn State’s position in the poll, the Nittany Lions were one of the few ranked teams to absolutely deliver on expectations of dominance with a 55-10 win at Rutgers.

12. Washington (15): The Huskies will move up thanks to shake ups within the top 16 and a dominant 54-7 win against Colorado.

13. Notre Dame (18): Since joining into a scheduling agreement in 2014, Notre Dame is now 40-7 in regular season games against the ACC after a 44-0 win against Boston College. The Fighting Irish, now 8-3 on the year, closed out their home slate with their 28th straight regular season win against an ACC opponent. They face USC on the road in next week’s regular-season finale.

14. Kansas State (19): Winners of three in their last four, the Wildcats are closing in on a Big 12 Championship Game spot after putting 41 points on the board in the first half and defending an early lead en route to a 17-point win at West Virginia. A win against rival Kansas next week secures Kansas State’s shot at a rematch with TCU in Dallas for the conference title.

15. UCLA (16): The Bruins gave up a 14-point lead in the first quarter and four-point advantage in the third as they fell to the Trojans in a key spot. With consecutive losses and now three in the last five weeks, the goodwill UCLA received early in the season can now be overlooked given its rough closing stretch.

16. Utah (10): The bill has come due from a rankings perspective for Utah, a team with three losses on the year but a win against the Pac-12’s lone one-loss team. Beating USC has provided some rankings strength that was overriding losses to Florida and UCLA, but now that Utah enters the debate of three-loss teams following a loss to Oregon, the head-to-head edge for the Bruins could determine how these teams stack up in the rankings.

17. Florida State (20): The Seminoles scored touchdowns on five of six first-half possession and never allowed a visit from Louisiana to become competitive, cruising to a 49-17 win.

18. Tulane (21): A Thursday night AAC showdown with SMU was expected to be a tough test for the Green Wave in the wake of last week’s close loss to UCF, but the Mustangs turned the ball over five times and Tulane seized the spotlight opportunity with a 59-24 win that should impress the voters.

19. Cincinnati (22): Now 9-2 after a 20-point win at Temple, Cincinnati can play its way into a fourth straight AAC title game appearance if it beats Tulane on the Friday after Thanksgiving.

21. North Carolina (13): The best thing North Carolina has going for it in terms of the rankings is only having two losses after falling 21-17 at home to Georgia Tech. Falling from No. 13 all the way out of the rankings is too drastic of an adjustment for this point in the season, but the tumble will be dramatic considering both the disappointing result (losing as a 21-point favorite) and the profile’s lack of high-end wins.

22. Ole Miss (14): The last four results for Ole Miss give little insight into where the Rebels stack up against the best teams in the country. There are three losses — by 25 to LSU, by six to Alabama and by 15 to unranked Arkansas — and a lone win by three at Texas A&M. Ole Miss is a few plays away from 9-2 with a top-10 win but also a few plays away from being 7-4 and out of the top 25. As it stands, we’ve got Lane Kiffin’s team hanging on just inside the rankings after Saturday night’s loss in Fayetteville.

23. Oregon State (25): The Beavers have now won eight games for the first time since 2012 after a convincing 31-7 road victory over Arizona State. They will have a chance to solidify their chances of the finishing the season ranked next week against Oregon.

24. Texas (NR): We’re projecting the Longhorns to break back into the rankings. Texas was not only one of the top vote-getters in last week’s balloting outside the top 25, but there will be some “sticker shock” for voters who might have expected Saturday’s game at Kansas to be a potential upset spot and instead saw a dominant 55-14 Longhorns win.

25. UCF (17): There is going to be a drop for UCF on every ballot after the 17-14 home loss to Navy, but the Knights will likely receive enough votes to stay inside the top 25. Now 8-3, UCF does have wins against Tulane and Cincinnati but losses to Louisville, ECU and Navy. The Midshipmen were 3-7 heading into the game, handing the Knights their worst loss of the season. Still, UCF is a team with only three losses and two wins against other teams in the top 25.

Projected to drop out: Oklahoma State (24)