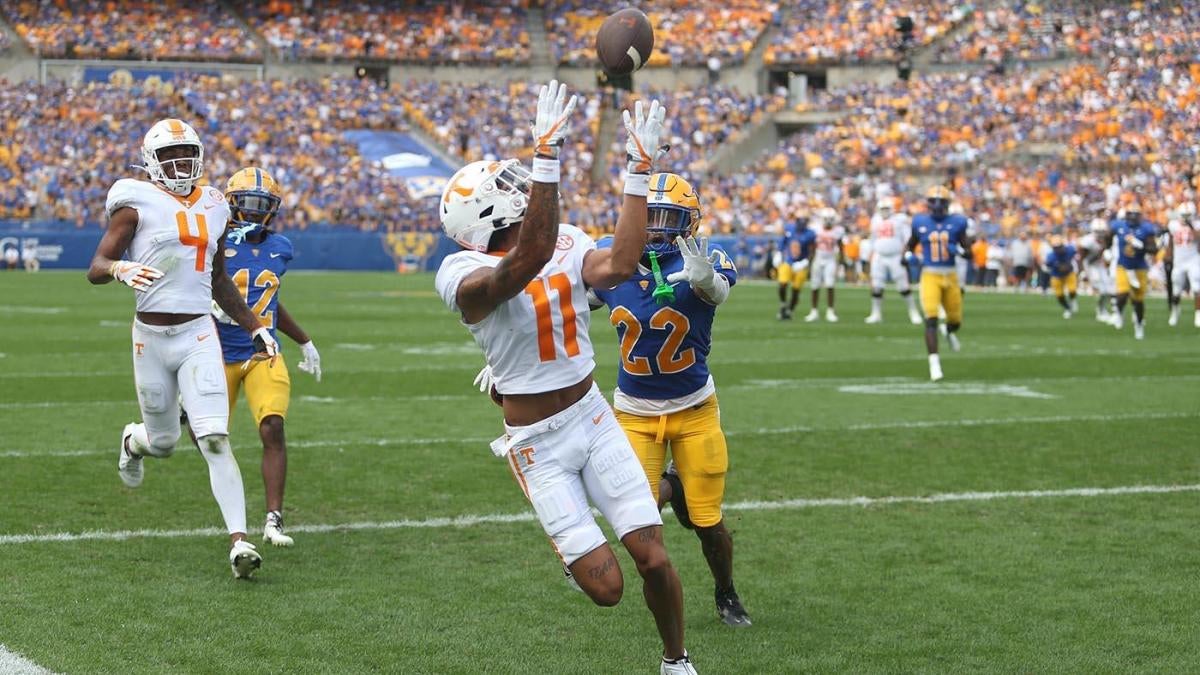 No. 17 Pittsburgh and No. 24 Tennessee played another thriller on Saturday as the Volunteers escaped with a 34-27 overtime win over the Panthers to avenge a 41-34 defeat in the nonconference series from a year ago. Facing a second-and-13 from the Pitt 28-yard line on the first possession of overtime, Tennessee quarterback Hendon Hooker found Cedric Tillman for the game-winning score. The Vols defense then held off Pitt to seal the victory.

The Panthers were playing with backup quarterback Nick Patti after starter Kedon Slovis left the game at halftime with an injury. Patti also appeared hobbled throughout the second half but managed to lead the Panthers on a game-tying drive late in the fourth quarter after a muffed Tennessee punt gave Pitt fresh life with 7:28 remaining.

Pittsburgh led 10-0 early and surged ahead 17-7 in the second quarter while Tennessee’s offense was slow to get going. But the Volunteers scored 17 unanswered to close the second quarter and take a 24-17 lead into halftime. Neither team looked sharp offensively in the second half; the Panthers’ game-tying score with 2:23 left marked the only non-overtime touchdown of the final 30 minutes.

Hooker starred for Tennessee by completing 27 of 42 passes for 325 yards and two touchdowns without an interception. Tillman finished with nine receptions for 162 yards and the critical overtime touchdown for the Volunteers.

Pittsburgh will be left playing the “what if” game after a heartbreaking defeat, and many of the questions will center around personnel. A week after running for 74 yards and two touchdowns on 16 attempts in a 38-31 win over West Virginia, physical back Rodney Hammond Jr missed the game due to injury.

Amid his absence, the Panthers offense was more pass-heavy than in Week 1, even while dealing with quarterback injury issues. After taking a series of big hits during the first half, including a final strip-sack from Tennessee’s Tyler Baron just before halftime, Slovis did not return for the second half.

Patti, who is in his fourth season with the program, filled in admirably but was quickly hobbled himself with an apparent leg injury, and the Panthers struggled to move the football in the second half. With center Owen Drexel also out for a key stretch late in the game, the Panthers were left to piecemeal their offensive unit together.

A cleaner bill of health could have spelled a different result for the Panthers against a Tennessee team that did little to gain separation against its hobbled foe in the second half.

Tennessee had several opportunities to take a two-possession lead at points during the second half. After scoring on four of their final five drives of the first half, however, the Volunteers sputtered under the weight of self-inflicted errors and couldn’t extend the lead while Pitt negotiated its injury issues.

An offensive pass interference penalty hampered the Vols’ first drive of the third quarter, setting up an insurmountable second-and-31, which led to a punt. Tennessee’s second series of the third quarter also got stuck behind the chains due to a penalty — a false start — and ended with a blocked punt. The Volunteers’ third series of the second half began with promise but ended on its fourth play with a fumble by running back Jaylen Wright.

Even the Volunteers’ lone scoring drive of the second half was hampered by setbacks, as a false start and sack turned a manageable field goal attempt into a 51-yarder that tested kicker Chase McGrath’s range. Ultimately, his make with 8:57 remaining made the score 27-20 and helped the Volunteers survive another blunder.

Tennessee forced a three-and-out that went to waste with 7:28 remaining when punt returner Trevon Flowers dropped the ball, setting the Panthers up with a short field and leading to a game-tying score.

Positives still to be found

While Tennessee’s second-half performance left much to be desired for a program hailed by many as a potential breakout team this season, Hooker’s performance was particularly steady. Though he was sacked on three occasions and struggled with passing precision in some key spots, the redshirt senior came through when it mattered most.

In overtime, he scampered for the apparent go-ahead touchdown before it was called back due to a holding penalty that set Tennessee behind the chains once again. On the next play though, Hooker evaded pressure, stepped up in the pocket and hit a 28-yard strike to Tillman. He then found his receiver for what would turn out to be the game-winning score. Hooker also emerged from Saturday’s fray without having committed a turnover, which made him a standout for a unit that dealt with its share of miscues.

Tennessee’s oft-maligned defense also rose to the challenge after a rough start. Hobbled as the Panthers may have been, the Volunteers made life even more difficult by consistently pressuring Pitt’s quarterbacks. Tennessee finished with four sacks and nine tackles for loss. At one point, Pitt went eight straight possessions without a touchdown.