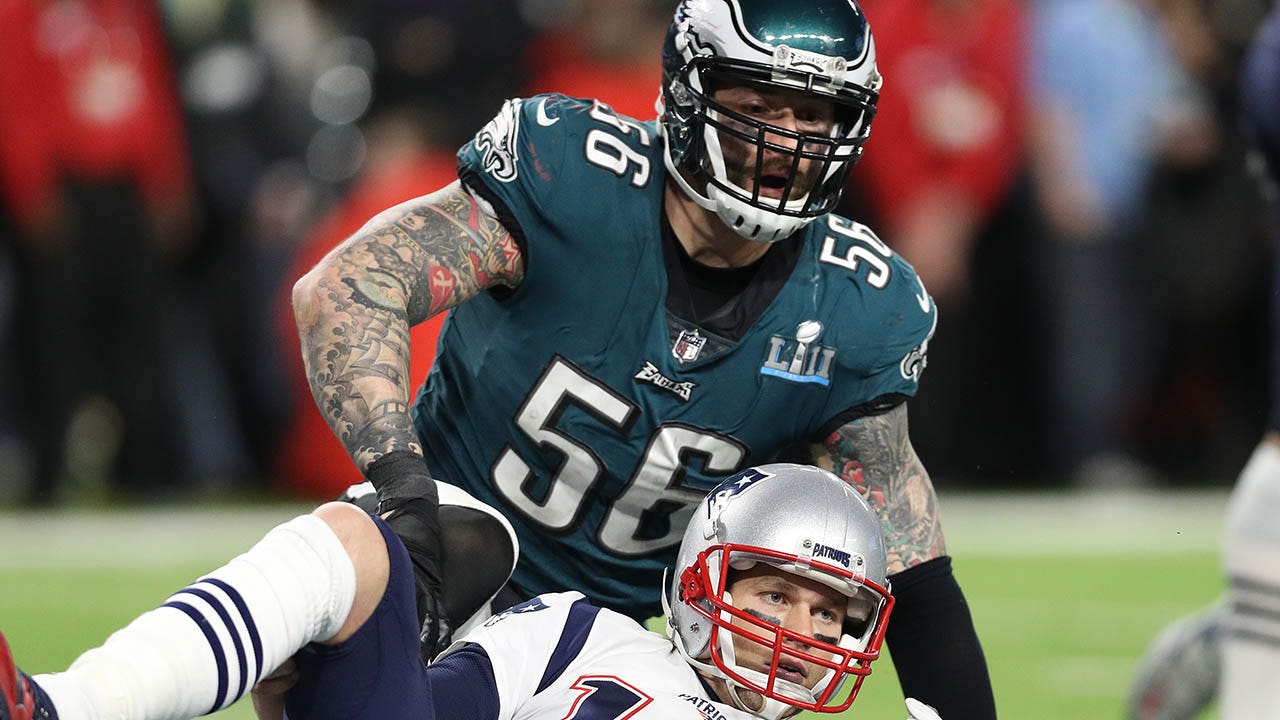 BORDENTOWN, N.J. – It’s an unseasonably warm, wet and foggy night in December and nearly 40 miles north of Lincoln Financial Field, adjacent to the Pennsylvania-New Jersey border, lies a dispensary packed with Philadelphia Eagles fans waiting to see Chris Long, one of the team’s former stars who helped bring a Super Bowl trophy to the city.

The 11-year defensive lineman who retired in 2018 and helped the Eagles win their first Vince Lombardi Trophy during the 2017 season appeared at a meet-and-greet with fans at Curaleaf in Bordentown, New Jersey, Wednesday night.

“It’s been a few years since I was on the team, but I still feel welcome when I come back,” Long told Fox News Digital in an interview from inside the cannabis dispensary that offers a large menu for recreational and medicinal consumers.

“And that’s really important to me because, when I got here, I just wanted to make a really good impression with fans. I just have the utmost respect for the fan base and just really lucky to be on this team. It’s great to feel the good energy when we come back. It’s the best part about being a champ, you know?”

Since his retirement, Long has become an advocate for marijuana use, especially to treat pain. He told Fox News Digital he used cannabis at first to help him sleep.

“What made me turn to cannabis is actually sleep. So, for me, it was insomnia, sleeping pills — all types of bad side effects — and it really just had a negative overall effect on my mental health and just on my sleep,” he said. “And the best day of my life was when I stopped using marijuana for recreation. I was like, ‘Oh, I can get real use out of this, this plant. This is a very functional thing for me and making that switch was such a game-changer. I also like to use cannabis for a whole host of reasons. But for me, what got me on was sleep.”

WEEDMAPS CEO CHRIS BEALS WANTS TO TALK CANNABIS ON SUPER BOWL SUNDAY: ‘WHY ARE WE CENSORING THIS?’

Long has previously said he used marijuana to treat pain and help him sleep while he was playing. The NFL was much harsher when it came to failed drug tests for marijuana. Long suggested that getting around the drug tests was simple because players knew when the date of the test was, but trying to stay clean in the days and weeks leading up to the test was tough.

Tom Brady (12) of the New England Patriots is tackled by Chris Long (56) of the Philadelphia Eagles in the fourth quarter in Super Bowl LII at U.S. Bank Stadium Feb. 4, 2018, in Minneapolis.
(Patrick Smith/Getty Images)

“You know when they are,” Long said of the drug tests. “The couple of weeks that I needed to be off, honestly, the time I would spend off cannabis before my test, I was the worst version of myself because I wasn’t restful. I was anxious. All the stresses of a pro football season, which was usually coming up, because it was usually in camp where we got tested. Those things were bubbling to the surface. And certainly to relax after a hard day of workouts and that sort of thing, I missed that. And so, as soon as I got tested, it was a lot better. Then you can start, and then you kinda knew when to stop.

“Now, they’ve raised the threshold now, so it’s easier to get around it. But I do think removing the stigma in sports is very important. Like we’re removing the stigma in general. I mean, it’s something you have to use responsibly. But it’s not something we should be afraid of. It’s something that’s a tool for a lot of people. And it was for me as an athlete. I think removing that stigma as an athlete because people think of us as like we’re these perfect physical specimen, well, this is part of my routine and it works for me.”

Today, Long said using cannabis isn’t just for pain. Among other things, he said he used the drug to help treat his own social anxiety and would rather have a joint than a couple glasses of wine.

“I’m using it for social anxiety because I’ll go somewhere and everybody else is drinking three or four drinks or whatever, and I’m not really into, you know, going to a dinner party and putting 4-6 back,” he told Fox News Digital. “I’d like to smoke a joint in the parking lot before I go. And because, for me, that’s my 1-2 glasses of merlot or something.

Chris Long (56) of the Philadelphia Eagles attempts to tackle Deshaun Watson (4) of the Houston Texans during the second half at Lincoln Financial Field Dec. 23, 2018, in Philadelphia.
(Brett Carlsen/Getty Images)

“So, sometimes it can take the edge off that way. Sometimes, it’ll help me work in some capacity. Sometimes it’ll help me focus on what I need to be focused on and then, depending on the usage, it can help me sleep. Really, it’s up to people to figure out responsibly and careful because this is powerful stuff, and it’s a powerful solution. You also just have to be just responsible about how you get into it and just see what’s right for you. That’s the way I would talk to another player or an athlete or person.”

EX-NFL STAR RICKY WILLIAMS ON HOW CANNABIS USE CHANGED HIS MINDSET, HELPED HIM DEAL WITH ANXIETY

Breaking the stigma that comes with marijuana use is one of the challenges Long and other athletes face. WeedMaps, a California-based marijuana delivery service, wasn’t permitted to air a commercial during the Super Bowl despite the game being played in the Los Angeles area and recreational marijuana being legal in the state.

Long said one of the steps to break the stigma would be people just being more open about marijuana use.

“I think it’s just people being open about the way they live their life. For me, it’s something that I’ve talked about with no shame,” he said. “I was talking to somebody in there, and they’re like, ‘Thank you for trying to work on the stigma through showing up here.’ I’m a businessman, I’m a father, I’m a husband. I’m all these things. I have a podcast. I have a foundation.

“I run all these things, and I smoke marijuana. It sounds dumb to say out loud, but that’s where we are. It’s like people are just so … they have these stereotypes. And cannabis is a part of my life. Like somebody else has another routine, that’s part of their life. And it helps me a great deal. So, I think more people just talk about it that are athletes and that sort of thing just to normalize it. And it’s not like some big scary thing. It’s just part of my life.”

His advice to others looking to indulge? Use marijuana responsibly – like anything else.

“I say, use it responsibly, just like you would anything else and try different stuff and start small,” Long told Fox News Digital. “And that’s the thing. Somebody will come into one of these shops and gets something a little too strong. I mean, some of my parents’ friends have been like, ‘Hey, I read that you uhh …’

“And I’m like, well you really need to read the labels because it’s not what you were smoking in the eighties or the seventies or the sixties. I think it’s just about like talking to people at a spot like Curaleaf. There’s a lot of talented, bright people behind the counter that can kind of push you in the right direction. And just know what you want out of it, and then you can kind of go in the direction you feel.”

Even though he’s been away from the field, Long is never too far away from the game. He hosts the “Green Light” podcast and is the founder of the Waterboys foundation, which help bring drinking water to communities in need. He’s also keeping an eye on the 2022 Eagles, who enter Sunday 11-1.

Philadelphia is the best team in the NFL with quarterback Jalen Hurts emerging as an MVP candidate, wide receiver Devonta Smith taking a giant leap in his career and the acquisition of A.J. Brown paying tremendous dividends.

“I was surprised because how could I see an MVP candidate come in this quick,” Long said of Hurts. “The guy was essentially a rookie like a year ago because Carson (Wentz), the whole situation his rookie year, like he couldn’t really get a true rookie year and that’s a tough situation to be dropped into. I think his resilience is amazing. His leadership qualities are evident, and it’s really easy to see that guys rally around him. And he throws a beautiful ball outside the numbers in deep, which is like, just watching him and A.J. Brown working together, it’s like they’re made for each other.”

Getting to the Super Bowl isn’t going to be an easy path.

The Eagles and the Minnesota Vikings have the best records in the NFC with the Dallas Cowboys not too far behind. The one key for the Eagles to get to the Super Bowl will be getting the No. 1 seed in the playoffs.

“Home field advantage,” Long said of what’s important for the Eagles to get back to the Super Bowl. “I think the NFC is tougher than people thought. I think they match up well with the Vikings. I was worried about the Niners, but Jimmy G is hurt so Brock Purdy, no sure thing.

“And, then, you talk about the Cowboys. That’s probably the other juggernaut-type team, and they get to see them on Christmas. That game is going to be a big driver in who gets home-field advantage, and I think, thus, who goes to the Super Bowl because there’s a big swing in how that game is played in Dallas and Philly and the weather as well.”

Ryan Gaydos is the sports editor for Fox News Digital.