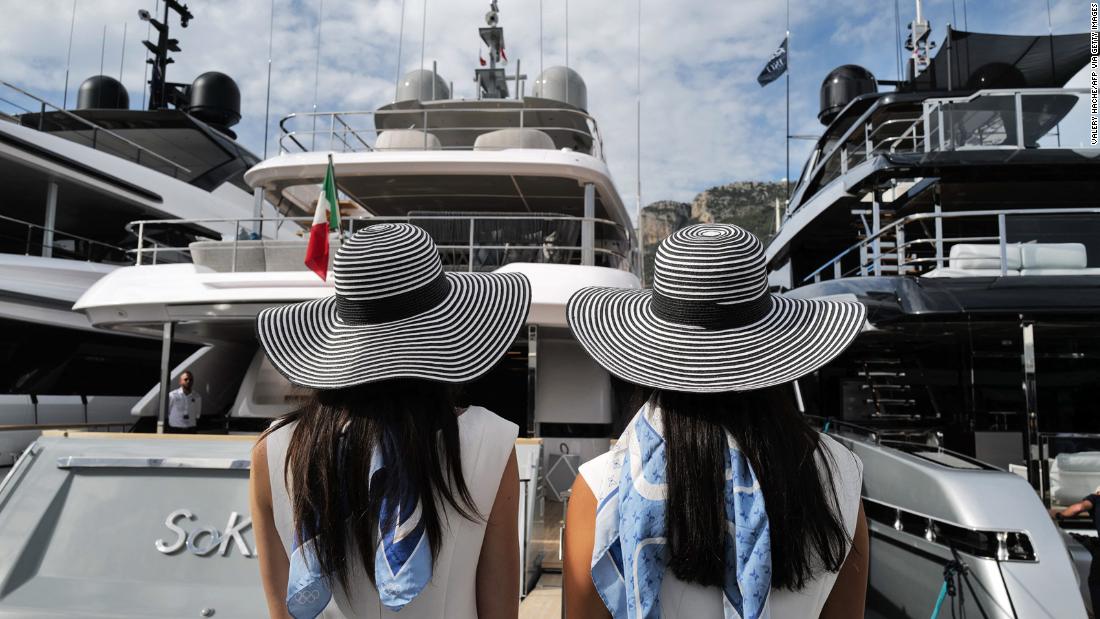 Monaco (CNN) — The world is in turmoil. The specter of global conflict lurks on the horizon. Energy prices are putting the squeeze on millions. Covid lingers. But in Monaco, at the yachting world’s most glamorous event, it’s business as usual.

This week, superyachts with a combined value of somewhere near $3.8 billion gathered together in the azure waters of the tiny European principality for the 31st annual Monaco Yacht Show. And no amount of geopolitical anxiety could tarnish the glitz.

“All of the boats are here,” Johan Pizzardini, head of communications and media for the Monaco Yacht Show told CNN Travel on the eve of the four-day event’s grand finale. Some 118 superyachts were among the luxury vessels on display in the country’s Port Hercule.

The superyacht crowd were out in force too.

The 31st edition of the Monaco Yacht Show began on September 28 and ends on October 1.

The show is specifically dedicated to the superyacht market. Every year, during normal times, an estimated 30,000 people descend on this tiny Mediterranean Riviera country to view the astounding spectacle of some of the biggest and most expensive superyachts in the world assembled in one place.

And while the event is undoubtedly an opportunity for wealthy boat owners to let their hair down in a safe space, sequestered away from the non-yacht-owning world, it’s also a chance to go shopping for yet more ocean-going opulence.

It is, as Pizzardini acknowledges, a “niche market.” But one that shows little signs of slowing down, despite turbulent times. There are around 40 brand new luxury yachts this year, including the massive 115.1-meter AHPO, the largest superyacht ever exhibited here.

Some of the huge yachts throwing out their mooring ropes, including the 62-meter Rio from Italian shipbuilder CRN and Tankoa Yachts’ 50-meter Kinda, belong to first-time yacht buyers.

This reflects a growing trend that developed significantly during the pandemic, when a vast number of new buyers opted to go big rather than work their way up from a smaller yacht.

“It [the pandemic] inspired people who were always thinking about buying a yacht,” Bob Denison, president and founder of Fort Lauderdale-based yacht brokerage Denison Yachting, which has four boats on display at the show, tells CNN Travel.

“People are thinking, ‘we’re not going to wait 10 years.’ They were coming out of nowhere and buying a 60-meter (yacht).

“We’re still seeing a lot of that, and I think that’s something that will continue. People are taking the plunge.”

Pizzardini has also noted a change in the attitudes of potential superyacht buyers as a result of the global pandemic.

“We saw a carpe diem period in which prospective clients that had been hesitating from chartering or purchasing a yacht for months or for years, saying, ‘Okay, in this period of uncertainty, I need to enjoy life,'” he says.

While there’s no doubt that the sanctions imposed against Russia over its invasion of Ukraine, which led to some of the largest and most expensive superyachts in the world being temporarily frozen, have had some impact on the industry, demand remains very strong.

Arthur Brouwer, chief executive officer of Dutch shipyard Heesen, notes that “order books are quite full” across the board despite elements of global uncertainty, due to the “post-Covid push.”

In fact, Boat International’s 2022 Global Order Book indicated that 1,024 superyachts were under construction or on order in 2022, an increase of 24% on the previous year, with a 10.5% rise in orders for those measuring 45 meters and above.

As the 2022 Monaco Yacht Show draws to a close, here are eight of the most lavish superyachts that have been wowing the wealthy.

Measuring 115 meters, Lürssen’s AHPO, seen prior to the show, is the largest superyacht on display.

This gigantic 115-meter superyacht from German shipyard Lürssen is undoubtedly one of the most popular vessels on display. The largest superyacht ever to be exhibited at the Monaco Yacht Show, it makes for an imposing sight along the only deep-water port in the tiny country on France’s Mediterranean coast.

Built with a steel hull and aluminum superstructure, AHPO, which has a 4,850 gross tonnage, consists of five decks and five cabins for a total of 14 guests.

Lusine, a 60-meter steel vessel from Dutch shipyard Heesen, is among the superyachts making their debut at this year’s Monaco Yacht Show. With its sleek, sharp edge and “bird wing” shape fusing three decks, Lusine is a stand out yacht in every sense.

Although its striking exterior, crafted by Omega Architects, is undoubtedly a spectacular sight. It’s Lusine’s painstakingly detailed interior, by Sinot Yacht Architecture and Design, that’s been drawing gasps from those lucky enough to be taken on board.

“We do a lot of boats and we’ve never done this before,” Heesen’s CEO Arthur Brouwer says of the superyacht, which cost an estimated $70 million to build. “The amount of detail is amazing.”

Named after the Armenian word for “moon,” Lusine’s interior has been wonderfully devised to combine elements of the ocean and the sky, with wall panels and tables featuring mother of pearl inlays, as well as midnight blue sculptures.

Its furnishings are made up of a special combination of materials, including white onyx, as well as rare woods and bespoke metals.

The vessel, which has capacity for up to 12 guests, is equipped with a helipad for private use, as well as a tender garage. With a 1,079 gross tonnage, Lusine is powered by two diesel engines, and can reach a maximum speed of 17.5 knots.

Classic sailing yacht Blush, seen taking to the waters of Antigua, is currently up for sale.

This beautiful 45-meter sailing yacht built by Italian shipyard Perini Navi has been exhibited at the Monaco Yacht Show several times since it was delivered back in 2007. However, its striking red exterior and sporty lines ensure that it always stands out from the crowd.

Designed by leading yacht designer and naval architect Ron Holland, the vessel recently underwent an extensive refit at a cost of about $1.8 million, with refurbishment work completed on both its exterior and interior.

Powered by a Caterpillar C-32 diesel engine, Blush is able to reach a top speed of 13.5 knots, and has a gross tonnage of 315. Owned by Formula One boss Eddie Jordan, it’s currently listed for sale at just under €12.5 million (around $12.2 million) via brokerage firm Camper & Nicholsons.

Delivered back in May, this stunning 62-meter superyacht, made of steel hull and aluminum, has been garnering plenty of attention at this year’s show due to its extraordinarily fun interior.

From its hand painted jungle-themed wall murals to its rugs featuring fish panels and animal-shaped ornaments, Rio is an explosion of vibrant colors from beginning to end.

Constructed by Italian shipbuilder CRN and designed by Omega Architects, the vessel, which has a gross tonnage of 1,218, is spread across four decks, and can accommodate up to 12 guests within its six colorful en-suite cabins. There’s also an on-board gym, featuring a Peloton bike, while the beach club has its own massage table.

Named after its owner’s first cat, Rio gives off a cozy, family feel that’s pretty unique, particularly for superyachts of this stature. “It’s impossible not to walk through that yacht without a smile on your face,” says one regular Monaco Yacht Show attendee.

Among the newest superyachts at the Monaco Yacht Show, Kinda has also been making a splash, partly due to its impressive foredeck swimming pool.

The vessel is powered by a hybrid propulsion system that’s been devised to provide increased fuel efficiency, with three different cruising modes, diesel-mechanical, diesel-electric and full-electric.

The fourth of Tankoa’s all-aluminum S501 series after Vertige, Bintador and Olokun, Kinda has a gross tonnage of 499, and can comfortably fit up to 12 guests in its six impressive suites.

Giraud is one of a number of superyachts that’s currently listed for sale.

It may not be one of the newest superyachts at the Monaco Yacht Show but Giraud is arguably one of the most eye-catching due to its magnificent sand-colored exterior, designed by Luca Dini Design & Architecture.

Previously named Cacos V, the 40-meter aluminum vessel was built by Italian shipyard Admiral, and delivered in 2013. Listed for sale with an asking price of over €12.9 million (about $12.6 million,) it’s fitted with five cabins, with capacity for 11 guests and a 479 gross tonnage.

Giraud is powered by two engines that provide the superyacht with a cruising speed of 14.0 knots.

Soaring’s unsual exterior ensures that it always stands out.

Another yacht of majestic stature, Soaring, the work of German superyacht builder Abeking & Rasmussen, stretches to a length of 68.2 meters.

The owner of the vessel is said to have requested a distinctive superyacht that wouldn’t be easily confused with any another, and German studio Focus Yard Design certainly achieved this.

Delivered in 2020, the four-deck superyacht features flowing, sporty lines, as well as a bright orange strip positioned just above the waterline that makes it pretty hard to miss.

With an interior volume of 1,541 gross tonnage, it holds six staterooms, along with a library and a luxurious spa and beach club.

Soaring is also up for sale, with a whopping €98 million price tag.

Victorious — the largest superyacht to be built in Turkey.

It’s not every day that you get to inspect a superyacht on the market for €110 million (about $107 million) but this year’s attendees have the opportunity to do just that. Measuring 85 meters, Victorious certainly lives up to its grand name.

There’s been an increasing amount of shipbuilding activity in Turkey in recent years, and this huge vessel from Turkish shipyard Akyacht happens to be the biggest superyacht ever constructed in the country.

Fitted with 11 en-suite cabins, as well as a master suite, the grand vessel has space for up to 20 guests. Its incredible list of amenities include a cinema room, a 200-square-meter beach club, a helipad and a wine and cigar club room with a fireplace.

Correction: An earlier version of this story misstated the value of the assembled superyachts.